So here are a few more small projects I've completed. 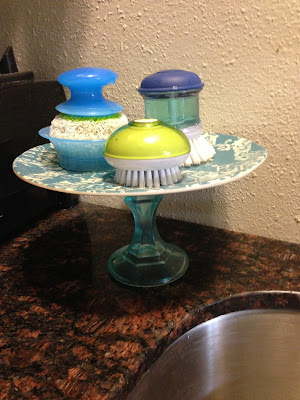 This is a combination of two tutorials I found on Pinterest...that of the sea glass candlestick holder and a DIY cake stand. I actually made three of these, though this smallest one I am using as a little stand for all my kitchen "scrubbies". I found the plate at Target, and just super-glued it to the painted and dried candlestick.

For the sea glass candlestick tutorial (which is super easy), click here. 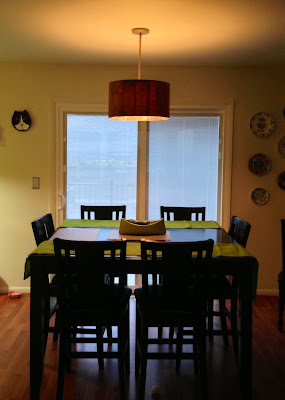 To the right, you'll see the dining room. I still want to add a pelmet box above the patio door and repaint everything, but first things first: get rid of the "boob" light that was on the ceiling. I really hate those lights, and they're everywhere in our house (two more in the kitchen that are yet to be replaced). Anyway, I knew I wanted a barrel pendant lamp over the dining room table, but with funds as tight as they are, I couldn't afford the ones I truly love. However, while at Lowe's one day, I saw this baby on clearance for $25.00 (that's 75% off!). It's hard to tell from the photo, but it's a muted brownish-stainless look (if that makes sense). The lampshade itself is taupe, with pictures of antique doors on the inside, which are visible when the light is on.

I personally think it's cute, and it will go great with everything else I have in mind for the kitchen. I don't know that I won't eventually replace it, but for now, it still looks 100 times better than the boob light that was there. 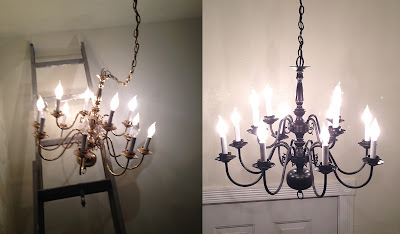 For the entryway, we got a hold of an extension ladder from a neighbor and then repainted the ugly brass chandelier that was hanging there (Rustoleum oil-rubbed bronze metallic spray paint - it was so easy!). Later, we were able to paint the entryway grey, so that it's no longer the blah off-white it used to be. You can "kinda' see the color here. Our awesome coatrack is on display here, too. 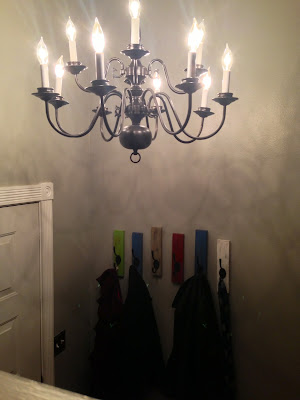 My latest project (below): distressed-looking signs. We have a bunch of old cedar fencing in our garage that was there when we got there (half of our fence is down due to bad windstorms that happened before we even moved in). I decided to repurpose some of it and first made a sign for my co-worker and friend Megan, and her fiancée, Yani. Then I decided to make one of my own to hand above the coat rack :) It's only my second attempt, so I know I'll get better as I keep trying, but so far I'm really liking it! 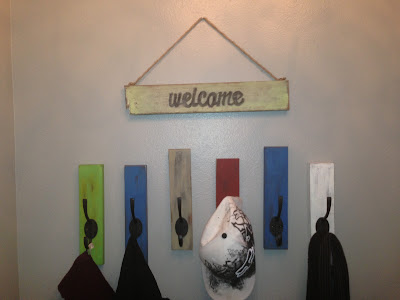 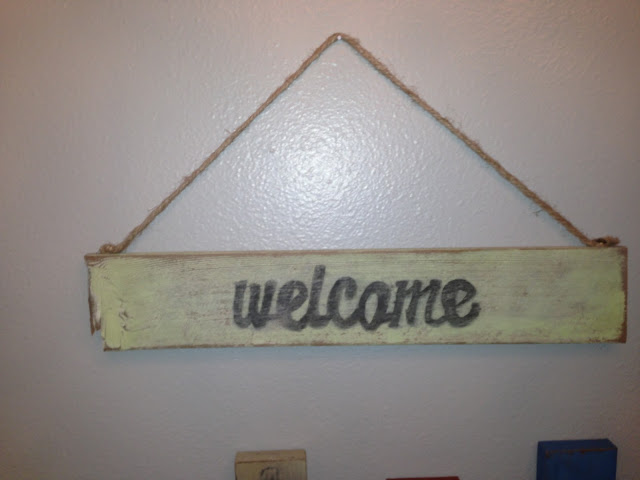